There is an amazing untold story of the brave men of Brigade 2506 who in an attempt to liberate Cuba from the horrors of communism 0n the 17th of April, 1961, fought to the last bullet. The Bay of Pigs attack was lead by counter-revolutionist highly trained and funded by the CIA. They fought bravely for 3 days until they had no ammo or suppose left. These brave warriors battle resembles the story of the 300 Spartans. They were outnumbered yet, they were wining the battle. They were brave and fearless like the Spartans that fought in the battle of Thermopylae for 3 days which held the Persians that outnumbered them from conquering Greece.

1400 men Cuban exiles and Americans went back to Cuba to over throw the government of Fidel Castro approved by President John F. Kennedy. 134 Cuban exiles and Americans were killed and 176 Cuban soldiers were killed in the Bay of Pigs invasion. With everything that went wrong the brave freedom fighters were winning. The plan was to invade Cuba by air and sea. At the last moment Kennedy pulled the air support, artillery, weapons and ammunition supply. What would have gone through the mind of these brave warriors winning the battle yet betrayed and left there to die? Imagine if Kennedy would have not betrayed these brave warriors they would have won. Cuba would have been prosperous and free today as it was before communism.

You rarely hear the truth about this battle. All you hear that it was a failed attempt by the Cuban Freedom Fighters. In Cuba they brag on how they defeated the evil capitalist empire of the United States.

At a young age I learn of the horrors and lies of communism/socialism. My story begins at around 4 years old. I came to the U.S.A the greatest country in the history of the world 3 weeks before my 5th birthday. I remember very little of Cuba. Yet, I will never forgot this day in the movie theatre in Bayamo, Oriente, Cuba. At the intermission I saw a film of captive men in camouflage being pushed around by soldiers. There was also a scene of Tarzan fighting some of the natives. They were saying that Tarzan was racist just like the Americans that made the Tarzan movies. I also remember some weird men in like an auditorium or political meeting clapping. I had many questions to my parents about what I had watched at the movie theatre. My fathers answer was when we leave the theatre I’ll explain. What I was watching was communist propaganda the way they brainwash people into believing in the failed communist system where everyone is equally poor with the exception of the leaders and high ranking officials. Around 13 years ago Forbes estimated Fidel Castro’s net worth at 900 million. Let me get back to my story. 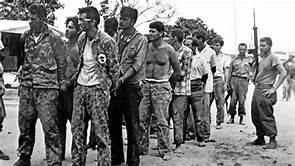 As we walked out of the theatre my father began to tell me but told me I had to keep it to myself. My father said that the men that were captured were brave men that returned to Cuba to fight Castro and communism. That they were caught and they were being mistreated by Castros militiamen.

He told me that the communist where trying to say that Tarzan was a racist because in that scene he was fighting black natives. He also told me that Tarzan had more battles with whites than the natives that most natives were Tarzan’s friends. My dad told me that one day we would live in America and be free.

Ironically, in my teen and early 20’s while I was in Jr. High until the beginning of college I was brain washed by the school system and media. It was the 70’s, the hippy, anti-government era. I started argue with my father. I became came liberal, agnostic and socialist. I drove my parents crazy. Imagine having taken me out of Cuba so the government wouldn’t brain wash me, take away my religion and turn me against my family and now in America it had happen. My dad would call me “un communist de mierda” a shitty communist. I think it was around 1979-80 that I started seeing the light with the gas crisis, hostage in Iran, Meriel boat lift and weakening of America and understood my dad. I enlisted in the United States Marine Corps Reserves. On December 2,1980 I started bootcamp and right away started believing in God again.

My dad was an Alpha Male and a bad ass. He was strong and a hard worker, a provider and the head of our household. When my dad was younger and before he got married to my mother he would street fight for money. My dad and his friends would go around Cuba with boxing gloves and challenge men to box. They would then place bets on my dad. His friends would tell me how he never lost a fight in Cuba. He learn to box by watching boxing matches.

I tell you this because my dad had the highest regards for the men of Brigade 2506. He would always talk to me about their bravery. Anytime he would meet a Bay of Pig veteran he would tell me that, that was a real man and how bad ass and brave they were. I grew up respecting and looking up to the men of Brigade 2506 and even more today knowing how they fought without no support and the betrayal of Kennedy.

As most Americans my age I remember the day JFK was murdered. I was sick at the hospital, I think I was there for a doctors visit. Everyone in the hospital was talking about Kennedy being shot. As I walk by a hospital room I saw a man with bandage on his foot. For years I thought that it was JFK. The ironic thing is that while the whole family is watching the burial on TV my mom starts crying. I did not understand why she was crying for a man that she disliked and betrayed us Cuban-Americans. When I got older I asked her. “mom where you crying when Kennedy died.” Her answer was he was the President of the United States. That is what a call a loving heart and truly what the Bible says love your enemy. That is far from how opponents of our President act and feel today.

Kennedy’s betrayal lead to the death and capture of these brave warriors. The Cuban Freedom Fighters blood was in JFK hands. Thank God that later other American presidents such as Nixon, Reagan and Trump have supported the Cuban-American cause. That is one of the main reasons why most Cuban Americans are Republican’s while other Hispanics are Democrats’. There are many other reasons why the majority of Cuban-American’s are not Democrats, yet I’ll mention 2 more reasons. 1. Clinton and Obama’s policies towards Cuba. 2. We lost Cuba to communism and today some members of the democratic party believe in socialism and communism. Some have even praised Fidel Castro and Che Guevara.

If any members of Brigade 2506 or their family sees anything wrong or off in this article on what truly happened please correct me. This is my account of what my parents stories and my research.